I enjoy golf. I don’t often play, and my game reflects it. Sometimes I slice the ball, sometimes I hook it, and sometimes it actually goes straight. I play simply for the fun of the sport. I generally know the rules of the game. I say generally because practically every time I’m on the course, my ball lands somewhere where I don’t quite know the rule on where to place the ball or how many strokes I am penalized for hitting the ball in that particular spot. 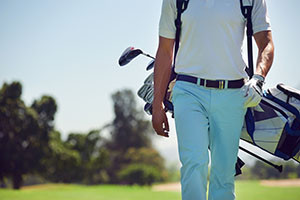 About two weeks ago I was golfing at the Acoaxet Country Club in Westport. I was on the first green and a ball came flying right over my partner’s head and landed six feet away from him on the green. The ball came from somebody driving off the sixth tee box and the person failed to yell “fore”. Fore is the term one yells if his ball is not going in the intended direction and is instead heading toward other golfers. It’s a warning one typically yells out of courtesy. I yell it both out of courtesy and to avoid potential liability. Yelling fore is a golf rule I do know, however after reaching the issue of golfer liability, it really doesn’t matter if you yell fore.

What is the liability of a golfer who strikes another golfer with a ball or even his or her club? I’ve been getting this question quite often from my golf friends. The standard in determining liability for golfers is the same standard used in other athletic events. In essence, a person, I’ll call this person the victim, must show that the defendant acted willfully, wantonly or recklessly. This is a higher standard of proof than mere negligence.

In 1989 the Massachusetts Supreme Judicial Court adopted the standard of reckless misconduct for personal injury arising out of athletic events. The case was Gauvin v. Clark. In that case a college hockey player struck another hockey player with his stick during a hockey game causing injury. The court said that despite violating a known safety rule, the player did not act willfully wantonly or recklessly and as such did not impose liability on the defendant. The court reasoned that a mere negligence standard would chill the vigorous and active participation in sporting events. You can use the same analogy in golf. Despite violating a known “safety” rule such as yelling fore, unless a golfer acted willfully, wantonly or recklessly liability will not be imposed.
In order to demonstrate that a defendant’s conduct was willful, wanton or reckless, a plaintiff must show, first, that the defendant knowingly and intentionally disregarded an unreasonable risk and, second, that the risk, viewed prospectively, entailed a high degree of probability that substantial harm would result.

This would also be the standard if a defendant golfer, while practicing his swing, accidentally struck and injured a plaintiff who was waiting to tee off.

As long as the two participants are participating in a physical, athletic sport involving some danger of physical contact, then a standard of recklessness should apply to the conduct of the participants.
The case law not only supports imposing a reckless standard to participants in contact and non-contact sports alike, so does common sense. I love tennis. Society however has little interest in imposing liability on a tennis player who negligently overswings his racquet and hits another player or a sailor whose attention wanders from the sail and carelessly allows the boom to swing and hit another. The court said, sport allows us freedom of uninhibited movement and a respite from society’s confining strictures concerning carelessness while not allowing us to engage in deliberate conduct that is willful, wanton or reckless.

With the above stated, there is a Superior court case which recently applied a mere negligence standard when one golfer struck another in the face with his club during a swing, however this case is not the generally accepted law in the Commonwealth.